The above is a picture of a single board computer named OK1012A-C.  From the name we can get this item is design from NXP LS1012A processor which features an advanced 64-bit Arm® Cortex®-A53 processor core with ECC-protected L1 and L2 cache memories along with datapath acceleration and network, peripheral interfaces required for networking, wireless infrastructure, and general-purpose embedded applications. Here we will do a test to verify whether it is really a low power efficient but high performance item. Firstly, we take this board at hand and install it will Ubuntu system, then start the testing.

We all know that Dhrystone and CoreMark are two general Benchmarks, CoreMark is a small synthetic benchmark that measures the performance of CPU widely used in embedded systems. Developed by Shay Gal-on in EEMBC to replace the antiquated Dhrystone benchmark. Coremark contains implementations of the following algorithms: list processing (find and sort), matrix manipulation (common matrix operations), state machine (determine if an input stream contains valid numbers), and CRC (cyclic redundancy check). It is designed to run on devices from 8-bit microcontrollers to 64-bit microprocessors.

The OK1012A-C single board computer is ported with CorMark program which allows users to just take command directly to do CoreMark test to verify the CPU performance. Follow below steps to do the testing.

we've got below result

It's approved that the LS1012A is a high-performance CPU by the CoreMark score 4111.

Finishing the CoreMark testing, next let's test what frequencies can be supported, we're told by the developers that presently OK1012A-C single board computer can support variable frequencies.

List frequencies that supported by the CPU on command line

we get below result

3. conservative: the same as above, but change to adjust the rate step by step instead of adjusting the rate one-stop.

Next, let's have a look at the management mode and CPU frequency

step 4. below information indicates it's managed to be changed

then when we check current CPU frequency, we see the frequency also changed

Dhrystone is also an universal program which was developed by Reinhold P. Weicker in 1984. It can be used to test CPU computing performance. It doesn't mean float point arithmetic, it indicates Dhrystone running frequency per second. Dhrystone testing program is also supported by OK1012A-C single board computer.

OK1012A-C single board computer is an excellent item in hardware features, in software, it's supported with Ubuntu and Open WRT, which can meet users' demand for private space and shared space, besides, it can support WIFI in 5G band width.

To meet our demand for shared space, we can use Samba. In the same LAN segment, run and type in target IP on windows, user name and pass code are needed.

We can realize our demand for private space by Lighttpd service of OK1012A-C single board computer. We can take lighttpd+php as a private clock platform. Take KODExplorer as PHP page(the KODExplorer is an open source web page with light private cloud drive tool developed based on PHP).

Besides, KODExplorer is also available on mobile phones, which is convenient for users to remote visit and use the files in private cloud drive by mobile phones.

We can drag the testing video from windows to the explorer and upload it, then we can play the video by right clicking menu.

Besides, it can also support audio files playing and files online editing.

At last, let's have a test of OpenWRT which is applicable for router and other network related devices. 11ac mode is supported by WLE900VX, and 11n is meanwhile compatible, the default mode is ac, 5G band.

The above is a picture of LuCI, we can take our mobile phones to 5G to explore the internet at a very fast speed. 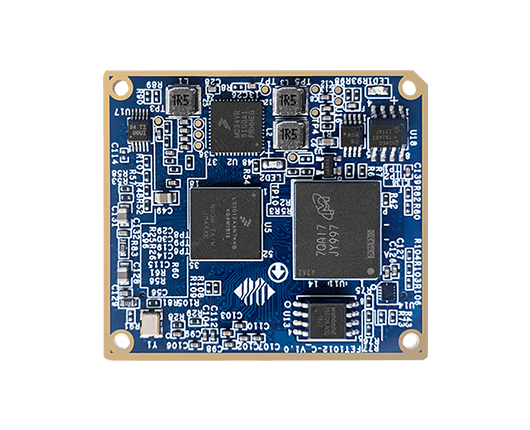